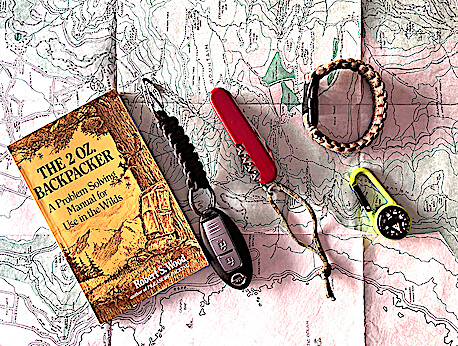 A growing trend worldwide is that of everyday carry or EDC. People photograph the useful items that they consistently carry against backgrounds and then upload them to social media. The photographic format is known as a flat lay. Whilst it is difficult to carry these items in person many of them are carried in daypacks or pouches.

Preparedness is the main reason for carrying the items and the concept has taken on internet following. Common items are key fobs, knives, torches, notebooks, pens, wallets, phones and suchlike.

Every so often a new item shows up, in my case I have the normal stuff but a while back added something new and extremely useful. Utility cord is known as paracord it’s very versatile and used in many situations. I have recently started carrying a variety of cords. For ease of carrying I wear a paracord bracelet which can be unravelled in an emergency. It gives you around 300cm. I use paracord 325 and 275. The number denotes the load-bearing capacity in pounds. I keep a hank of paracord I’m my car as it is useful for lashing and it can be reused.

The name is derived from its original purpose as suspension lines on parachutes. It’s a slim woven rope with 7-9 inner strands covered by an outer woven sleeve.

After Work War II it became available to the general public as military surplus. Its popularity has grown in leaps and bounds. If safety is critical look for MILSPEC rated cord ( Military Specification).

So why carry paracord?

I suppose the most common reason would be for an emergency repair. I have replaced a damaged tent guy rope with the cord, in an emergency, one would be able to rig a shelter. You could even use the inner threads as a thread if you need to repair a tear. I also lashed a desk that I had to transport on the back of my load box when my wife started to work from home. Recently I replaced the cord of a pair of tracksuit pants with a utility cord.

The real survival buffs even suggest using it as a sling or to fasten a splint to an injured limb. Or even as an emergency tourniquet to stop bleeding.

Because it is slightly stretchable it can be snugly wrapped around an item. This gives a better grip and means that you have length at hand. Think skeleton style knife and axes or even a walking stick.

I have also used the cord to personalise items in my kit and it makes retrieval from a pocket a lot easier. The multitude of colours adds a new dimension to personalisation. Most knives have lanyard holes and the lanyard helps if you are carrying a knife without a pocket clip

The brighter colours increase visibility, your essentials are easier to find and harder to lose. This is great when you carry a kit in a bag or pouch. You can also use the loops to hang stuff from hooks or even in a tent.

Well, it can take up space so for daily use when I am out I wear a bracelet. In the storage compartment in the door of my vehicle, I keep 15 metres. So as not to be messy I tidy it up after each use. I also keep a short length in my daypack for any emergency. This proved to be useful recently when a friend over zealously snapped a lace bootlace when we were out. He replaced it with a length of cord.

I have seen multiple uses and the more “craft” orientated braid it and make belts, camera straps and even key chains.

Whilst I have a functional minimalist approach to EDC paracord has proven to be a valuable addition. One last thing, those of us who served in the military will remember is the length of green paracord we were issued with. The prime purpose was a wash line to hang our laundry, but we found numerous other uses for it as well. Remember this when you need to dry washing when camping. Or even want to rig a tarpaulin for shade or privacy. Improvise, it’s amazing stuff.